Home » Articles » What is the perfect low histamine diet?
Photo by Ella Olsson on Pexels.com

A lot of people send me messages or comments asking questions about foods on different lists they have read. Asking, “Am I allowed to eat this? Is it safe?” I usually say “Well, yes, you’re allowed to eat anything you want”! All foods are safe, but for you right now, is it appropriate?

Every person is different, so no low histamine diet is “Perfect”

Lists are guides, not an ultimatum!

All the lists out there are guides that you can use to work out what works for your body. My belief is that all food is good, healthy and nourishing for us. It’s just that some of us are reacting to certain foods. When it comes to a low histamine diet, there’s a general list of high histamine foods that are generally agreed to by everybody for example fermented foods – alcohol, vinegar, sauerkraut, kombucha, yeasts and sourdough. The vegetables eggplant, spinach, tomato, chilli, and fruit such as avocado, citrus, bananas and strawberries.

But when it comes to the finer details of the diet, you get a lot of disagreement. And I believe a lot of this disagreement is because most lists are written from the point of a person’s experience, either a single person or a group of people who’ve been surveyed. So that means there are multiple different lists out there.

Different foods can have different levels of histamine in them, depending on where they were grown, how ripe they are, how they’ve been stored, how old it is, because histamine is produced as a part of ripening and degradation of foods. Also if you cook something, say a piece of chicken quickly, it will have much lower levels of histamine than that same piece of chicken slow cooked. Storage plays a part, so a meal that you eat on Monday, if leftover in the fridge to Tuesday is much higher in histamine.

Along with this peoples individual levels of tolerance – their histamine buckets – vary. And some people can tolerate leftovers or occasional higher histamine foods. So as you can see it can be difficult to find a perfect list with exactly what you should and shouldn’t eat. Other underlying factors also influence this bucket and potential reactions.

Let’s look at the details

One list that’s well-recognized is the Swiss Interest Group Histamine Intolerance list (SIGHI). This list is actually based on surveys and experiential information from groups of people. So a bit of the information is based on lab testing or measured levels of histamine in foods, but most of it is from different people each with very different histamine tolerance levels.

Janice Joneja is a well-known Canadian dietician, who was one of the first people to write about histamine intolerance. Her foods to avoid list is very short, she doesn’t avoid gluten or dairy. She says that pretty much all spices are tolerated in moderation but advises against cinnamon. Sweet potato is limited and most legumes and all nuts are allowed except walnuts and pecans. All berries are avoided. Dr Jonejas’ list is based on her research into the science and experience with her clients.

If you compare Dr Jonejas’ list with the SIGHI list, SIGHI has a huge list of foods on it that are rated from zero, one, two and three based on compatibility. On this list cinnamon, blueberries and sweet potato are listed as compatible and low in histamine. All legumes contain histamine (chickpeas and black eyed peas are lowest), and all nuts are listed as high in histamine except for macadamia, brazil and pistachio??? What gives?

When you read the SIGHI list, you will find a lot of items that are noted with a two for compatibility, but they don’t have an H next to them for high histamine. They often also have question marks against them. Looking for example, at buckwheat, it is not high in histamine, however it’s rated as a two for compatibility on the list. That may be because of self-experience surveys that have been provided by patients who have other underlying issues. They could have small intestinal bacterial overgrowth or SIBO, where a patient is having issues with grains and fibrous foods. They may have an issue with oxalates, which are another type of food intolerance. Buckwheat is very high in oxalate. And the missing link that is often happening is mast cell activation, which can occur for different substance in different people.

So as you can see a lot of the lists are actually altered by what else might’ve been going on in the patient population that have helped to create this list. It may well be that a lot of the things that are in there to avoid are actually not high in histamine, but may well be listed due to another type of food intolerance.

Why do we have such differences in the lists?

So why does this happen? It may be due to mast cell activation. There may be a small amount of Mast Cell Activation that is occurring alongside histamine intolerance. This may not be full blown Mast Cell Activation Syndrome (MCAS) but a less obvious form. Mast cells activating along with leaky gut can cause other types of food intolerances such as oxalates, salicylates etc. You could have SIBO, fungal overgrowth or other bacterial overgrowth and gut issues which can cause other types of food intolerances as well. There may be fructose malabsorption or lactose intolerance present.

So what is the best low histamine food list?

You can take this list and run with it and not just have a big list of ”oh my God, I can’t eat this” foods! You actually can look at it and say, “Okay, there’s a big long list of foods I can eat, let’s start there”.

So, keep in mind when you’re looking at all of the lists, they are a guide, they are only a guide. If you’re looking at a lot of them and you’re getting confused, then go and see a practitioner. You might find that there’s something else going on. You might need to work on gut healing. You might need to work on your stress levels. The nervous system has a big impact on histamine intolerance and all food sensitivity. So please take all lists with a little grain of salt and just test it for yourself. And if somebody else in a group is saying, “Don’t eat this, I can’t eat this.” Remember that yes they can’t eat it, but you may be able to. Focus on eating as much variety as you can. And in as many colors as you can, eat as big a rainbow of vegetables and fruit as you’re able to.

I hope that helps to take away some of that mystery of what is a perfect histamine diet because there isn’t one. The perfect diet is the diet that’s right for you, that your symptoms reduce, you feel comfortable with life and you have been ready to start healing your root causes.

Ultra-Low Histamine Meal Plan – Your low histamine elimination diet made easy with 4-weekly meal plans, over 55 recipes, and prep guides and shopping lists for each week.

Updated plant-based recipe eBook
Next Post: What to read on food labels (and what to ignore) 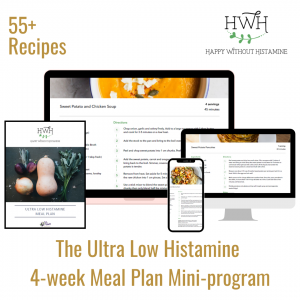 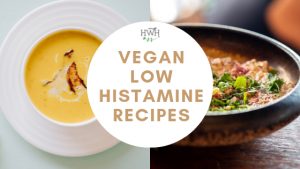